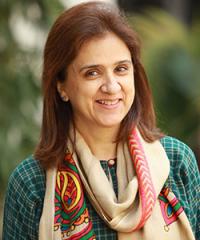 Nadhra Khan’s primary area of research and interest is 19th Century Sikh Art and Architectural Ornament in the Punjab, but she also focuses on Mughal Art and Architecture (16th to 18th century). Her work emphasizes the significance of the Sikh period as the last episode of centuries old indigenous art and architectural tradition before annexation of the Punjab by the British in 1849 that changed, among other things, the visual culture of the Punjab forever. A research project that started with one Sikh funerary monument or samadhi built to honor Maharaja Ranjit Singh has led her to study almost all major monuments dateable to this period, including the Golden Temple Amritsar, Sikh period havelis and various other samadhis. Her current research includes the impact of Sikh architectural vocabulary on subsequent British Raj architecture in the Punjab and the deep impact of British art and craft education on traditional art and craft practices.