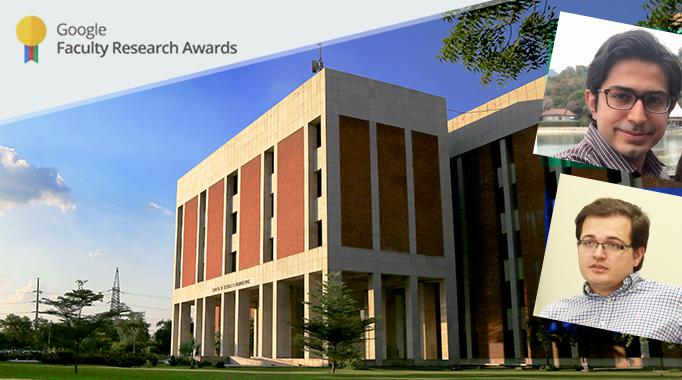 Dr. Ihsan Ayyub Qazi, Chair and Associate Professor of Computer Science at Syed Babar Ali School of  Science and Engineering (SBASSE), LUMS, and Dr. Zafar Ayyub Qazi, Assistant Professor of Computer Science at SBASSE, LUMS, have won the highly prestigious and competitive Google Faculty Research Award for their proposal on designing technologies for making the Web faster for the next billion Internet users in developing countries.

As part of their project, they will build technologies to improve Web performance on slow devices and networks, which are widely prevalent in developing countries. The proposed research can have a long-term impact on how users in the developing world experience the Web.

Google Faculty Research Awards are one-year awards structured as unrestricted gifts to support the research of world-class faculty members at top universities around the world pursuing cutting-edge research in areas of mutual interest. In addition, the award provides both faculty and students the opportunity to work directly with Google researchers and engineers. These awards are highly competitive – only 15% of applicants receive funding – and each proposal goes through a rigorous Google-wide review process. Last year, Google received 1033 proposals covering 46 countries and over 360 universities. After expert reviews and committee discussions, Google decided to fund only 152 projects. Generally, less than 5% of funded proposals are from outside the US. It is a big honour for the two Professors, LUMS and Pakistan to have received this award.

Commenting on the research focus at LUMS and its impact on their work, Dr. Ihsan said, “LUMS provides a vibrant environment for carrying out research. It has all the ingredients of a world-class University, which includes outstanding faculty, excellent students, highly supportive staff and administration, and a great working environment. The sustained focus on research at LUMS played an important role in inspiring our work.

Since we came back to Pakistan and joined LUMS, we have been driven by the goal of improving the quality and penetration of Internet access. Motivated by this vision, we evolved a research agenda that is based on two important trends. First, mobile phones have become the dominant mode of Internet access in developing countries. Second, low-end mobile phones (with limited capabilities) and slow networks are common in developing countries, which significantly degrade users’ experience of the Web.

We believe if we can make the Web faster on slow devices and networks, this can have a profound socio-economic impact on millions of users in developing countries.”

Initially in 2016, both Drs. Ihsan and Zafar conducted a research study on the characteristics of mobile phones (e.g., CPU speeds and memory sizes) in Pakistan using a dataset of 0.5 million subscribers from one of the largest cellular operators in Pakistan. This study was presented at ACM IMC 2016, a top-tier conference on Internet measurements. This was one of the first works that highlighted the need to design services, network infrastructure, and client software (e.g., browser) that is aware of device limitations in such regions. This work generated a lot of interest in the industry and the academic community. It also had great relevance for the research vision of the Google Chrome Mobile Team, which focusses on making the Web faster for the next billion users in emerging markets. This motivated them to submit a proposal for the Google Faculty Research Award.

“We were invited for a mini-workshop at Google’s Seattle office to participate and give a talk about Internet access challenges in developing countries. The workshop was attended by researchers from MIT, Brown University, Harvard University, University of Southern California, Columbia University, New York University, Stony Brook University, and LUMS. Later, after a rigorous review process, Google decided to fund our proposal,” explained Dr. Ihsan.

Winning this prestigious Google Faculty Research Award is a big achievement. LUMS is proud of both Dr. Ihsan and Dr. Zafar and wishes them the best of luck for future endeavours.