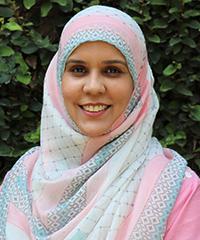 Dr. Maryam Mustafa received her Ph.D. in Computer Science from the Technical University of Braunschweig in 2015, Masters in Computer Science from Cornell University NY and  BSc. (Hons) degree from LUMS with a major in Computer Science. Her research interests are in Human Computer Interaction (HCI), Mixed Realities and Information Communication Technologies for Development (ICT4D).  Her work is interdisciplinary in nature and draws from cognitive sciences, human perception, sociology and anthropology to inform the design of ICT interventions. More recently her work has focused on the gendered design of technologies to promote equitable access for women in Pakistan.

Her work has appeared in premier HCI conferences, such as ACM CHI, and journals including Communications of the ACM(CACM). She has also published in premier perceptual graphics journals including ACM Transactions on Applied Perception and IEEE Computer Graphics and Applications. Her work has been funded by the Gates foundation and the United States National Science Foundation.