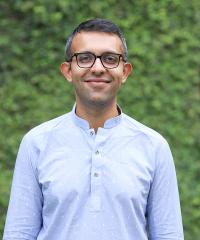 Shayan Rajani is Assistant Professor of History in the Department of Humanities and Social Sciences. He received his doctoral degree in History from Tufts University. His research is on early modern South Asia and the Mughal world. In particular, he studies the region of Sindh.

His first book project, "Leaving Legacies: Making Individual and the World in Early Modern South Asia," examines the enterprise of assembling texts, monuments, and children as a concerted effort to leave memorials for posterity. In doing so, it investigates the intellectual, social, and material history of the individual in South Asia, specifically in Sindh, from the seventeenth to the nineteenth centuries. He investigates the role of leaving legacies in constructing the individual and the world, following the material and gendered choices that contribute towards producing, sustaining, and transmuting these two interrelated assemblages across the rise and fall of the Mughal Empire.

At LUMS, he teaches a broad range of courses including “The Mughals and their World”, “A People’s History of Pakistan,” “Gender, Sexuality, and South Asia,” and “Sindh and the World.”

“Competing for Distinction: Lineage and Individual Recognition in Eighteenth-Century Sindh.” Journal of the Royal Asiatic Society 3, 30, 3 (2020): 397-416.

“Moving in Makli: The Politics of Walking in Eighteenth Century Sindh.” International Conference on Makli, Makli. 2018.

“Contemplating the Extraordinary: The Rise of the Wonders and Marvels Genre in the Eighteenth Century.” Annual Conference on South Asia, University of Wisconsin, Madison. 2016.