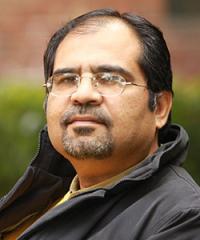 Furrukh Khan has been with LUMS since 2001. He has a PhD in Postcolonial Studies from University of Kent at Canterbury, where he taught for two years prior to coming to LUMS. He has also taught English as a Foreign Language in the UK during the summers. His research interests include the Partition of India, Postcolonial Literature, Shakespeare and Oral History. His publications have appeared among others in Index on Censorship, AngloFiles and The International Journal of Punjab Studies as well as a chapter in The Novels of Bapsi Sidhwa (Edited by R.K. Dhawan and Novy Kapadia) and in Gender, Conflict and Migration (Edited by Navnita Chadha Behera). Furrukh has also published a case study: Empowerment through Representation: Aurat Foundation's Initiative in Local Governance. Managing NGOs in Developing Countries (Volume Three: Gender Challenges). Edited by Dawood Ghaznavi and Bashir Ahmad Khan. Karachi, Oxford University Press, 2006. Furrukh was selected as the South Asia Fellow by Social Science Research Council in 2003. He was hosted by The Center for the Study of Developing Societies in Delhi as the ASIA Fellow, funded by a grant from the Asian Scholarship Foundation in 2006. He was selected as the British Academy/ESRC Visiting Fellow from South Asia and the Middle East and affiliated with University of Manchester in 2007. Furrukh has also directed Stories of the Broken Self, a documentary on the Pakistani women's narratives of the 1947 Partition.