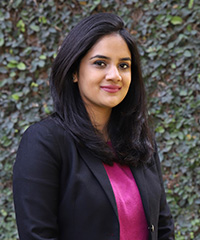 Hiba Akbar is a Teaching Fellow at SAHSOL where she teaches Constitutional (Comparative) Law, Criminal Law, Introduction to Pakistan's Legal System and Introduction to Legal Reasoning.

Hiba's research interests lie at the intersection of gender, labour and law. Before joining LUMS, she was a Lecturer at the School of Law and Policy at the University of Management and Technology, Lahore, where she had been working since completing her LL.M. She completed her LL.M from Columbia Law School as a Fulbright Scholar. She graduated from Columbia Law School as a Harlan Fiske Stone Scholar. During her LL.M, she participated in Columbia Law School's 'Sexuality and Gender Law Clinic,' where she worked on reproductive rights and the rights of transgender prisoners in New York prisons.

Prior to her LL.M, Hiba worked at a commercial law firm in Lahore and assisted on an exciting research study on rape law reform in Pakistan for the National Commission on Status of Women.