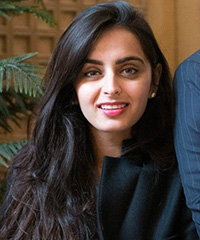 Sahar Bandial is an Advocate of the High Courts. She completed the Tripos in Law from the University of Cambridge in 2010 and a B.A (Hons.) in Political Science from Wellesley College in 2008. Sahar is currently working at Hamid Law Associates and litigates in the areas of constitutional, civil, banking, labour and family law before the Civil Court and the High Court. Sahar has also worked with the Punjab Judicial Academy as an instructor in its General Training Programme for Civil Judges and Additional District Judges.

Sahar has a keen interest in gender and law, and legislative drafting. She co-authored the Anti-Rape Bill, which was passed into law as the Criminal Law (Amendment) (Offences Relating to Rape) Act in 2016, and the Punjab Maternity Benefits (Amendment) Bill, introduced before the Punjab Assembly in 2019. She has been regularly writing on the subject of women’s rights in various daily publications.

Sahar was a contributing writer in an edited volume titled, “Disputed Legacies, Pakistan Papers” edited by Neelum Hussain, which was published by Zubaan Publishers in 2019. Her contributing chapter is titled“Law of Rape: Conceptual Limits, Procedural Indifference and Questions of Reform.”