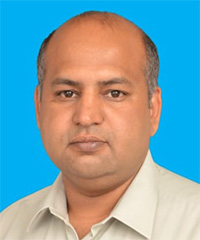 Muhammad Faryad received his BSc degree in mathematics and physics in 2002 from the University of Punjab, MSc and MPhil degrees in electronics from the Quaid-i-Azam University in 2006 and 2008, respectively, and PhD degree in engineering science and mechanics from the Pennsylvania State University in 2012. He worked as a lecturer in the Quaid-i-Azam University from 2007 to 2009, as a postdoctoral scholar in the Pennsylvania State University from 2012 to 2014, and as an assistant professor in the Lahore University of Management Sciences (LUMS) from 2014 till present. He is also serving as the chair of the physics department since 2018.

Dr. Faryad’s research work focuses on the interaction of light with modern metamaterials and complex materials. His major research areas are surface plasmonics, optical sensors, electromagnetics of complex materials, dyadic Green functions for anisotropic mediums, and nanostructured solar cells. He has authored and coauthored more than one hundred journal and proceeding articles, a book chapter, and a book. He is a section editor (thin films and plasmonics) of the International Journal of Light and Electron Optics (Optik) since 2016.

Dr. Faryad is also interested in outreach activities for school children. He is the founding faculty advisor of the SPIE chapter at LUMS. This chapter regularly conducts outreach activities in primary and elementary schools. Dr. Faryad is a senior member of the international society of optics and photonics (SPIE) and the Optical Society of America (OSA), and a member of the American Physical Society (APS). He was awarded the Gallieno Denardo award by the Abdus Salam International Center of Theoretical Physics (ICTP) and the International Commission on Optics (ICO) in 2019 for contributions to the research, education, and outreach in optics.