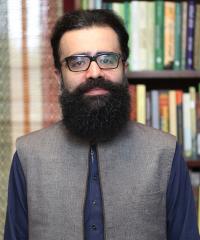 Ali Usman Qasmi, Associate Professor (History) at the School of Humanities and Social Sciences, joined LUMS in January 2012. He received his PhD from the South Asia Institute of Heidelberg University in March 2009. Before joining LUMS, he was a Newton Fellow for post doctoral research at Royal Holloway College, University of London. He has published extensively in reputed academic journals such as Modern Asian Studies and Journal of Islamic Studies. He is the author of Questioning the Authority of the Past: The Ahl al-Qur’an Movements in the Punjab (Karachi: Oxford University Press, 2011). His second monograph, The Ahmadis and the Politics of Religious Exclusion in Pakistan (London: Anthem Press, 2014), was the recipient of Karachi Literature Festival (KLF) Peace Prize in 2015. Dr. Qasmi has co-edited several edited volumes as well, which include Revisioning Iqbal as a Poet and Muslim Political Thinker (Heidelberg: Draupadi, 2010), The Shi‘a in Modern South Asia: Religion, History and Politics (New Delhi: Cambridge University Press, 2015) and Muslims against the Muslim League: Critiques of the Ideas of Pakistan (New Delhi: Cambridge University Press, 2017).