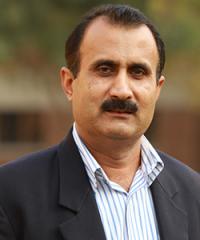 Dr. Hussain has developed several effective research collaborations with the leading nanomaterials groups in USA, Europe, China, Saudi Arabia (KAUST) and several National Institutions in Pakistan and have visited many of these institutions as a visiting faculty notably UMass (Amherst, USA), EPFL (Switzerland), Cambridge (UK, as a Charles Wallace Fellow), KAUST (Saudi Arabia) and several universities in China. In 2017 & 2019, he has served as a Foreign Professor at Huazhong University of Science & Technology (HUST), Wuhan, China.

Dr. Hussain has served as the Chair of National Nanotech Experts Panel at Pakistan Council for Science & Technology in 2015 and currently is the member of the National Core Group of Chemistry and Chair of the National Core Group of Nanotechnology formed by the PM Task Force on Science & Technology. He has also been awarded 02 Gold Medals in Chemistry by Pakistan Academy of Sciences (PAS) in 2007 (Prof. Atta-ur-Rahman Gold Medal) & 2014 (PAS Gold Medal).

For more information, his professional profile can also be viewed at Wikipedia, LinkedIn, Google Scholar, and ResearchGate etc. He is also available on Facebook and Twitter (DrIrshadSadhana).