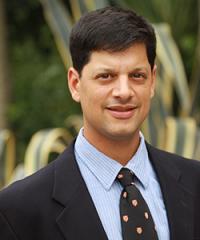 Office of the Dean, MGSHSS

Ali Khan is Associate Professor of Anthropology and Department Chair at the Department of Humanities and Social Sciences at LUMS. His research interests vary from labour issues, particularly child and bonded labour to popular culture in Pakistan focusing particularly on cinema and sports. He has previously worked in Washington and in Islamabad for the World Bank's South Asia Region and with the International Labour Organisation primarily on projects related to child and bonded labour. Ali Khan's book Representing Children: Power, Policy and the Discourse on Child Labour in the Football Manufacturing Industry of Pakistan was published in October 2007 by Oxford University Press. He is also the General Editor for a series of books on Sociology and Anthropology in Pakistan. Four of these volumes have been published. Two more are due shortly. Ali Khan is currently undertaking research on the Pakistani Film industry and cricket and society in Pakistan. He has an MPhil and a PhD in Social Anthropology from the University of Cambridge in England.